Bookmark the Facebook page of The Metcalfe Society. Find out all the latest news and tips there.   Don’t forget to ‘Like Us’.

‘The Mecca News’ is the Society's award winning journal published three times a year in April, August and December. The Mecca News contains members’ news, amusing snippets, requests for or offers of help, member updates, and Metcalfe stories of interest past and present.
Find out more about the many interesting stories past and present by reviewing the   index of past issues.

On a semi-regular basis electronic email newsletters are distributed to our members who have provided The Society with an email address. These are often released between editions of the Mecca News. But don’t worry if you don’t have regular access to the Internet or email as all the news from the newsletters will be repeated in the next edition of the Mecca News.

Over the last few years the Society has been collecting information on Metcalfes who were involved in World War One. In addition we have downloaded a lot of general information about the War. We now present a summary of those findings, plus a large amount of data so that you can research your relative. If we have missed anyone out please do let us know. 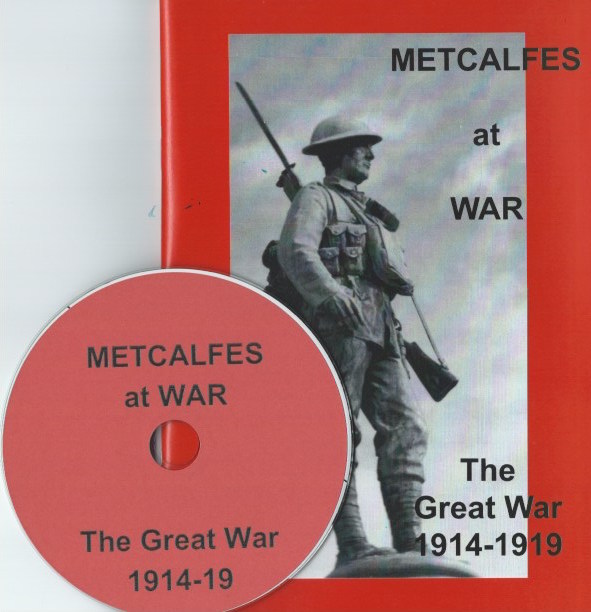 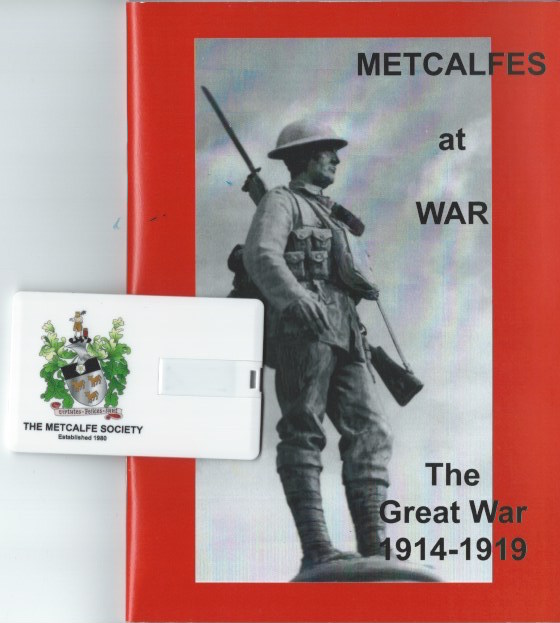 Metcalfes at War - The Great War 1914-1919 is a 64 page booklet bringing together details of the War Front as it involved Metcalfes plus stories from individuals. It is accompanied by a CD-rom or a USB card (depending on your requirements) which hold a large amount of additional data. The booklet with a CD-rom is priced at £10.00 plus postage and packing, or a booklet with the USB card is £12.00 plus P&P. All available from the Metcalfe Society Shop.

How do you save your data when you are researching at an archive centre or other source?

Why not use a Metcalfe Society USB card? It clearly identifies the Society, is the same size as a normal credit or debit card, and the connection pops out when you want to use it. The card holds 16Gb of data - so there is plenty of room for your own research files and at the same time you will be supporting the Society. The USB card is priced at just £8 plus postage and packing, and is despatched to you in a padded envelope.

Available now from the Society's Shop - hurry while stocks last!

The Metcalfe Society are delighted to announce that the 2019 Mecca Muster and AGM will be held on Saturday 5th October 2019. Due to the success and feedback from the members attending the 2018 event, it will once again be held in the superb location of Tennants The Garden Rooms at Leyburn, DL8 5SG, North Yorkshire, UK. So make a note of the date in your diary and why not plan an autumn   weekend or longer holiday in the Yorkshire Dales in 2019. Find out more here

The year 2017 was the 300th anniversary of the birth of Blind Jack Metcalf of Knaresborough. To commemorate, a proposal has been put forward to rename the Harrogate bypass after the Knaresborough legend. Find out more in the article.

The 1 August 2016 was an historic day …
The Yorkshire Dales National Park was extended by 24% as of that day - so now there are many more reasons to visit the Yorkshire Dales and find out where your Metcalfe family history originated.

‘Calf Top’ is the summit of Middleton Fell, and to most people a rather unassuming hill south of Sedbergh & west of Dent in the Yorkshire Dales. To the Metcalfe clan though, it is the perceived home of the first Metcalfe (William Medecalf de Dent) and the top of the hill was the boundary of Metcalfe lands. Calf Top has now taken it rightful place in the geography of the Yorkshire Dales as it is no longer a hill, but is now officially classified as a mountain.  Previously measured at 609 metres (1,999 feet) Calf Top was just a few inches from being a mountain (2,000 feet). Enthusiasts have now remeasured the old hill using the latest technologies and the result of 2000.2 feet has been accepted by Ordnance Survey who have confirmed it is now England’s last mountain.